The market at Porta Palazzo, the biggest open air market in Europe, is obviously full of vendors and they  offer beside foods mainly clothings, bags and accessories. 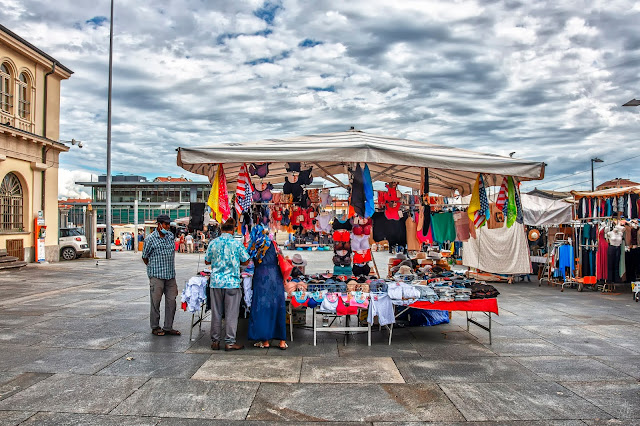 Most of the vendors are actually not italian, those who sell clothings, bags and accessories are mainly the chinese and africans. 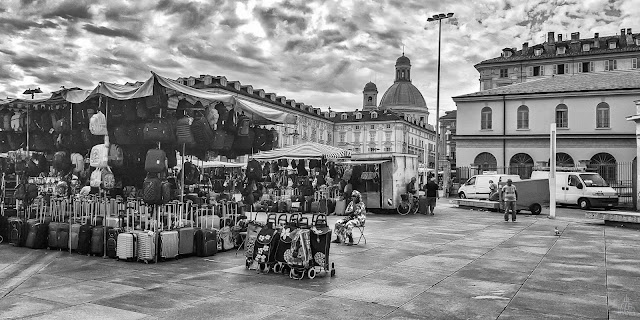 While making the photo, one of the African vendor wanted to know if I did ask their permission to photograph them. I told him that I am not doing close up of any person, so it is not necessary to ask any permission since the market is a public place.

In Italy, the COVID-19 green certificate facilitates attendance at certain public events (such as trade fairs, concerts, sports competitions, parties following religious or civil ceremonies) and access to health care facilities for the elderly (RSA). It is also mandatory when moving into and out of areas that may be classified as "red" or "orange" zones in the absence of valid reasons for work, health or proven urgency. 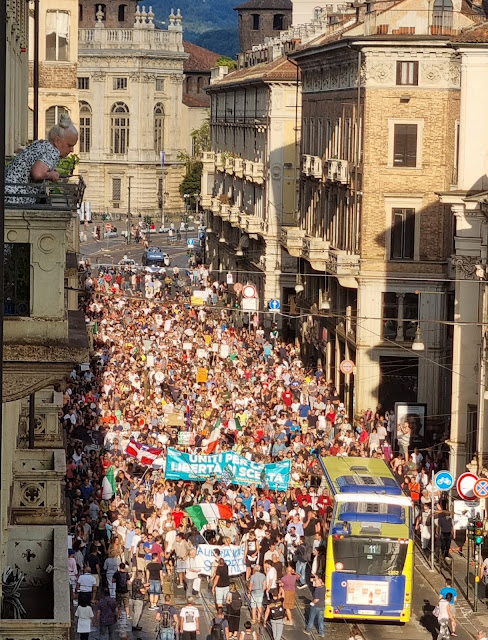 Recently, the Green Pass requirement extended to domestic travel.  Passengers are only be allowed to use certain public transport if they show a Green Pass, which proves recent vaccination, a negative COVID test in the past 48 hours or recovery from the disease in the last six months.

The rule, announced some weeks ago, applies to domestic flights, train travel between regions and sea travel. Some ferries are exempt, such as those serving many tiny islands which have no other connections to the mainland, and those used by commuters between Sicily and the southern tip of the mainland in Calabria.

Several protests against the obligation of Green Pass have been held in some major cities and in Torino, the protest has been going on every Saturday in the center of the city.

A fire started out at about 11 am yesterday on the roof of a building in front of the central train station.

The black thick smoke could be seen from the street near to our house. Went nearer to take a look and saw that the whole block was fenced and the streets surrounding were blocked and 3 group of firemen were busy trying to stop the fire.

By the time at about 1700 hours, regardless of the firemen's effort to stop the fire, it had spread down to the appartment below and by 2230 hours the lower level's appartments started to catch the fire too.

The Palatine Gate (Italian: Porta Palatina or Porte Palatine; Piedmontese: Tor Roman-e) is a Roman Age city gate located in Turin, Italy. The gate provided access through the city walls of Julia Augusta Taurinorum (modern Turin) from the North side and, as a result, it constituted the Porta Principalis Dextra (Right-Side Main Gate) of the old town.

The Palatine Gate represents the primary archaeological evidence of the city's Roman phase, and is one of the best preserved 1st-century BC Roman gateways in the world. Together with the ancient theatre's remains, located a short distance away, it is part of the so-called Archaeological Park, opened in 2006. 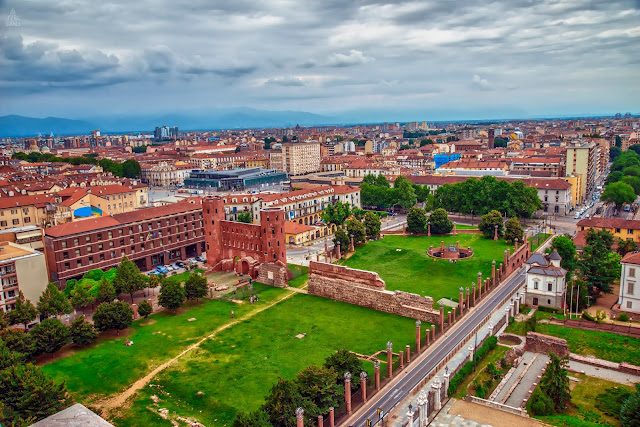 From the top of bell tower of the the Duomo, the whole gate and the piece of remaining old wall can be seen and it is quite impressive.

Music, an essential part of a parade, it helps to bring up the atmosphere and in some ways, manipulates the emotion of the crowd. 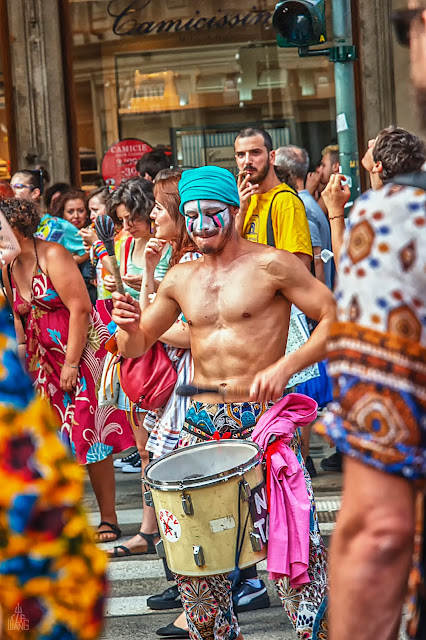 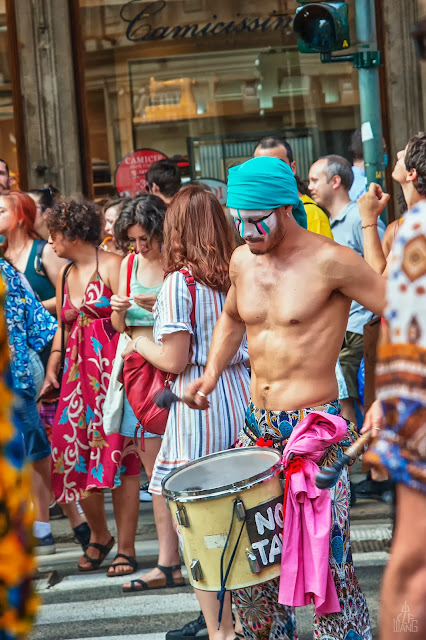 The music during the K Free Pride was especially energetic and influencing. 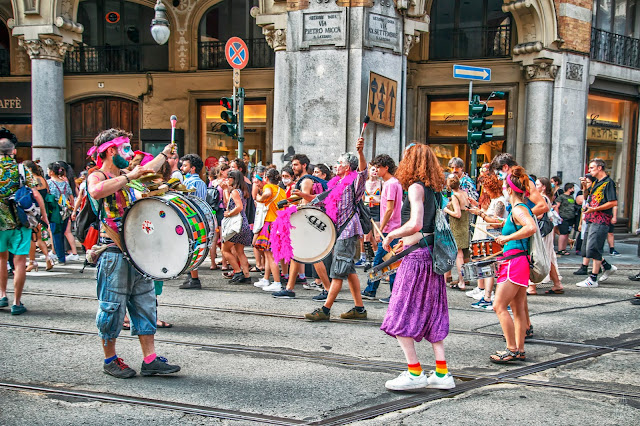 No matter what attire you are in, it is always nice to meet and greet each other. 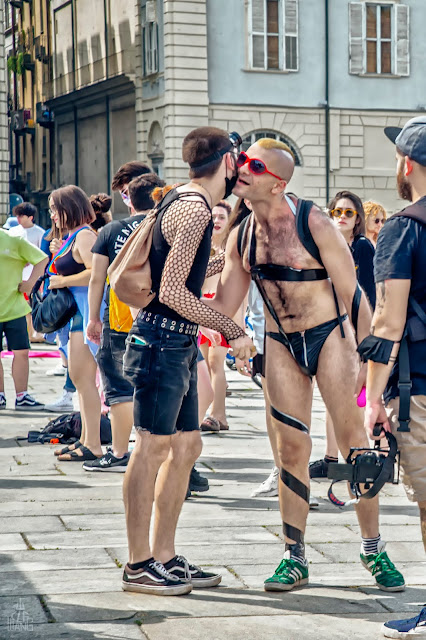 Attitude is what defined you, not what you are wearing....

Saw some girls gathered together and one was holding the sign: Spank Me Please. Not sure should anyone go ahead and do it, but I just took a picture with no intention of fulfilling her request. 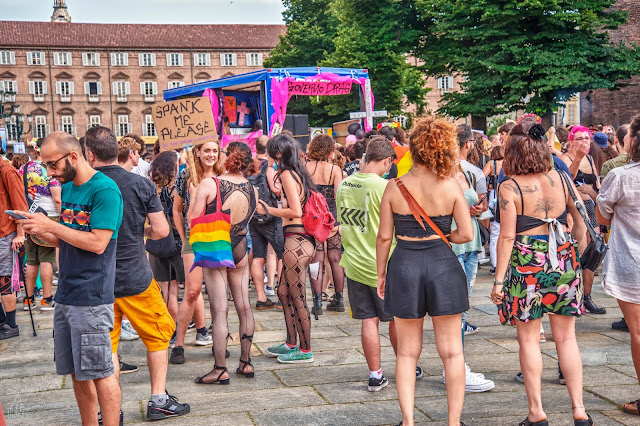